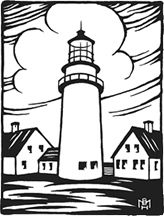 A BRIEF AND EVER GROWING HISTORY OF THE TOWN OF TRURO MASSACHUSETTS, TAKEN FROM SOME WRITINGS IN THE TRURO CHAMBER OF COMMERCE INFORMATION BROCHURES OF YEARS PAST, RICH’S TRURO, AND WRITINGS OF F. WESLEY GARRAN.

In November of 1620, the Pilgrims sailed into Cape Cod Bay and anchored in what is now Provincetown Harbor. Having lived under cramped, smelly, dirty conditions for the previous few months, many came ashore to look around. A group led by Miles Standish, (who had the nickname “Captain Shrimp”), wandered into what became Truro. There they found fresh water (Pilgrim Springs), a cache of maize (Corn Hill) and a place to camp out for the night, (Pond Village). While tromping about in Truro the Pilgrims met a group of locals, Pamet Indians. Both sides fired on each other. Fortunately no one was hit and as honor had been satisfied, the locals and the “wash-a- shores” withdrew. A few weeks later the Pilgrims weighed anchor and sailed across the bay to what is now Plymouth. They would be back!

In 1709, Truro was incorporated as a town. The descendents of those Pilgrims, who had stopped by almost ninety years before, had returned. Initially Truro was part of Eastham, but Truro had some unique advantages that made settlement popular and with hard work, a good living could be realized. In those days the land which is now Wellfleet was swampy and marshy, and created a geographical barrier to the south. Communication was difficult by land and only slightly easier by sea.

There was a good harbor at the mouth of the Pamet River and East Harbor, which is now Pilgrim Lake. In addition there was plenty of upland, which would allow for farming and pastures. With this prosperity the local citizens were able to build a church and pay a minister. Having a house of worship and supporting a minister for at least two years was a requirement to become a town. This was accomplished and on July 16, 1709, Truro was incorporated, and became an official town of the Massachusetts Bay Colony.

Through the Revolutionary War and the War of 1812, Truro both participated and prospered. Gentlemen from Truro were sent to Nantucket to teach the islanders the art of killing whales and blackfish. Small shipbuilding in the harbor, fishing, salt-works through the use of windmills combined with large gardens made for a good life in this small hamlet.

In the middle part of the nineteenth century the Pamet Harbor shoaled in. This ended the shipbuilding and the easy access to the bay with an all weather harbor for a refuge. Beach Point threatened East Harbor, which had become accessible only at the highest tides in the Fall and Spring. Farming alone wouldn’t sustain a booming economy, so Truro started getting smaller as many of the best and the brightest moved away.

Shortly after the Civil War the railroad came through Truro with its terminus in Provincetown. Transportation and access was now available on a more reliable venue than the weather, tide and sea. Those farmers left in Truro had discovered that sandy soil was excellent for growing asparagus and turnip. Asparagus for the Boston Yankees, turnip for the Irish, a swamp garden, a few cows and chickens, a lot of hard work and a decent living could be made. Another benefit from the railroad was the arrival of the summer tourist. Summer hotels quickly appeared near Truro Center, Highland Light and Pond Road, with many of the larger older homes becoming guesthouses. These people had to be fed, watered and carted – something which still goes on today.

The biggest event in Truro’s history was yet to come. Shortly after World War II, the Federal Government straightened and rebuilt Route 6. Millions and millions of people were now a day’s drive away from Truro. Route 6 was wider, smooth and modern; and they came. On many days during the summer season Truro may have as many as 15,000 people enjoying the sun, the woods and the beach. Another substantial factor in today’s Truro is the creation of the National Seashore in 1960. This has preserved almost 2/3rds of Truro in its natural state. Truro is very fortunate that much of what the Pilgrims saw and the Pamets enjoyed will be there for future generations of Truro citizens and visiting guests.

Please take advantage of what Truro has to offer.

The Highland House Museum and The Truro Library Visit the Truro Chamber of Commerce Information Booth - Route 6 at Head of the Meadow Road in North Truro - 508.487.1288

“We saw the sunset in the Bay, -- for standing on that narrow Cape was, as I have said, like being on the deck of a vessel... this sight drove everything else quite out of our heads... the shining torch of the sun fell into the ocean.”